The daytime agenda for the Sunday of our little holiday took is to Hull – the primary purpose for going here, as mentioned in my previous post, was because this city is the setting for an amount of my first novel (that I have been writing fo 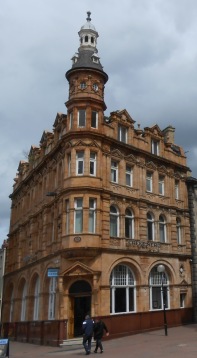 r many years) and thus it was an opportunity for me to refresh my aged memories of the city and re-visit some particular spots of relevance; it was thus a shame that, after another poor night of sleep, I literally resembled the living dead (at least on the inside, or so I imagine) and much of the day I felt like a zombie… and unfortunately when I am like that then I can be a moody, miserable cow, as has been confirmed.

To ease the potential boredom for my friends, Ruth came up with the good idea of a treasure trail, which I readily agreed to, having done a couple with Kirsty before, both of which were fun; essentially the idea is that the trail takes you around a place of interest, clues are solved using writing on buildings or monuments, and at the end one can enter a competition to win an annual prize. Unfortunately, when I am in zombie-mood my brain is rather slow to get off the ground… and so I felt of little use during the trail, especially accompanied by a Mensa member who seemed to know where to look for most of the answers before my brain had even digested the question! Fortunately the treasure trail did go to a few places relevant to my book, including Queens Gardens, the old town, the marina, and past Princes Quay Shopping Centre, which we did not get to go in; I snapped away with my little girly camera as we went, so have some research recorded, and it was great to reminisce in places wher 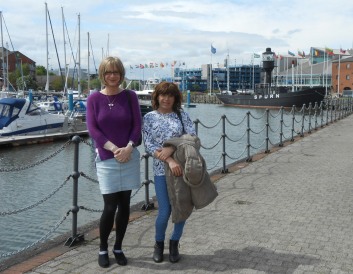 e I had not been for over 20 years. Lunch was at a café alongside the marina, but although the staff were nice and friendly the food and drink on offer was rather bland. At the end of the trail all clues were solved, and then we went straight home.

Back at Leeds we relaxed at Kate’s home, listening to her saxophone-playing; shortly after 7.00pm Ruth’s neighbour-and-friend Charlotte came around for dinner… and perhaps it was the excitement of meeting her, but I finally perked up a bit – she is a really friendly, enthusiastic, tell-it-like-it-is woman, and easy to talk to, so we had a very enjoyable evening of chat, a lovely dinner followed by Ruth’s tasty chocolate cake and Kate’s homemade ice cream. Alas Charlotte had to go at around 10.15, and a little while later we said goodbye to Kate who went to bed early in advance of an early start at work the following morning.

On Monday it was time to depart and, after loading all of our bags into Kirsty’s car, Ruth accompanied us to our first port of call, a touristy town called Haworth – if you are as old as me and from the UK, years ago you may well have seen adverts of a boy carrying a loaf of Hovis bread 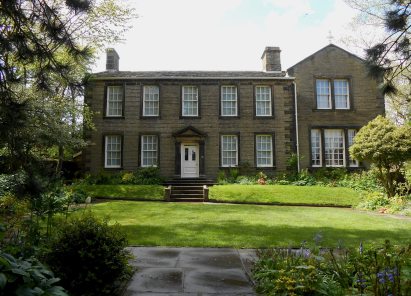 up a long cobbled hill to the tune of Dvorak’s New World Symphony… and Haworth’s most attractive feature is a street just like that, full of character. Alas when we arrived it was steadily raining, and we walked from our cars about 15 minutes to the town’s main historical point of interest, the Bronte Parsonage, a museum-conversion of the house where the Bronte sisters grew up and where some of their most famous works, such as Wuthering Heights, were penned. We entered through the front door and began a self-guided tour, with booklets handed out by a friendly guide who we all had some friendly chat with. The place was quite interesting, with authentic furniture – some reproduction, but also some original, including a very ordinary-looking dining table that the museum had recently paid £600,000 for! A few things stood out to me as we went around – exhibits of some of their writings were penned in microscopic scribbles, the life-conditions were absolutely appalling even though it was less than two hundred years ago (including open sewers and little proper drinking water), and the correspondingly high mortality rate… including the death of two of the Bronte sisters at ages 10 and 11; some of the lace exhibits were also very pretty.

Once out of the museum we retraced our steps, thankfully in the sunlight as the weather had finally brightened up. We took a few pictures of the pleasant surroundings and then went into a café that, at least from the outside, looked quite promising from the displays of cakes in the window. Once seated a woman with slightly odd-coloured hair passed out menus; a few minutes later we ordered… as she raved about her own cakes. Then a man, who presumably co-owned the place, said “Hello people” (which is frankly an odd way to address anyone at all) and then said “I didn’t like to say ‘guys’ in case it offended”… and that made it totally obvious that we had been read, at least by him, as a group of transgender ‘people’. My stomach instantly turned into lead and sank to the floor, and I felt totally drained and put off my snack by this idiot’s incredible clumsiness… and after a few remarks between us-girls about the incident I decided I 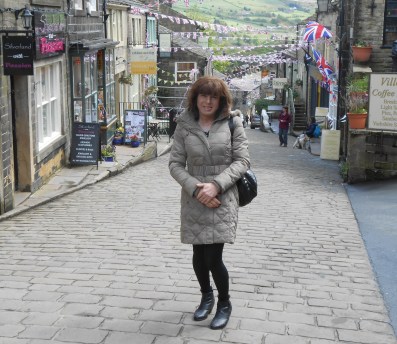 had to vacate the place as quickly as possible and cancelled my order, partly to avoid any further discussion about it, and partly because I can’t be bothered to pay for the services of someone so rude, whether it be through ignorance or otherwise… and I am glad I did because once I had gone the guy apologised and my friends were able to educate him on how to not treat TG people by drawing attention to their nature. In the cafe Ruth said “Think of us as pioneers”… and I suppose we are, but personally I only think of myself as a woman and anything that upsets that is unwanted. I walked down a few buildings to a shop called “…And Chocolate” selling hand-made chocolates sourced from Belgium and France – the owner was a really nice guy, he offered me a sample of a chocolate and we had some really jovial chat as I slowly picked a small selection of chocolates; he also let me try a couple of different pieces of dark chocolate, and we discussed just how different they were despite only a 2% difference in cocoa content; I also joked a bit with one of his other customers who came in after me and was bowled over by the quality of the chocolate. Once out of there I bought a bun from a baker’s and, after browsing a home-wares shop, sat outside and munched away, eventually joined by my friends. We returned to our cars… and that is where we parted, just a little deflated by the clumsy cafe incident… sigh… but I guess that it is further proof that the larger the number of TS-women in a group the more likely it is that eventually an incident such as this may occur.

2 thoughts on “Andrea & Kirsty’s 2nd Big Adventure – Part 2: Reminiscing in Hull (through the eyes of a zombie), Bronte-Country… and TG-Clumsiness”