At the end of my last blog post I hinted at the events of the weekend that has now just gone. Twice a year my parents come to visit me, once in September and once in April – last September they visited someone that they have always considered to be their son and at the end of October 2014 I told them that in actual fact that was not the case and due to Gender Dysphoria I consider that I am a girl; their initial responses made me wonder whether I would ever see them again. But as time went on they have slowly come to terms with my news, learnt about my condition, and accepted me… and so their April visit went ahead this year.

Friday evening at 6.45 my parents eased up my driveway in their car and pulled up near the house; I was still cleaning, and so I anxiously stepped out of the back door and approached the car as they got out, my Dad a bit ahead of my Mum. I said hello and Dad said I looked very nice… and then he hugged me for, as far as I recall, only the second time in my life since my age hit double figures; and he gave me a little kiss on the side of my head, my first ever! Then my mum and I had a long hug, for over a minute, and we both sniffled a few tears – after a while she said “You know we both love you, don’t you” and I replied “I always hope so”… and after that everything was pretty much the same as it always was, except that I was a bit more chatty and so much happier than I have ever been with them before; unfortunately one thing that was also the same as normal was my mum’s use of pronouns, as she mis-gendered me a few times… and so I said that every time she did so I would call her ‘Mummy’ which I know she does not like. The evening flew by though, we caught up, watched some television, chatted, and all too soon it was time for bed; my mum said my nightie and nightgown were very swish… which made up for her earlier criticism that my make-up was ‘a bit obvious’… though as I have a facial hair issue to cover up then what does she expect… and compared to her make-up, which consists of pale blue eye-shadow and nothing else, then I suppose it is relatively obvious.

Saturday was a lovely sunny day and so I decided to wear a day-dress… the first time my parents have seen me wear anything but trousers. In the morning we went shopping into my nearest town, Banbridge, where my parents bought some natural herbal remedies while I acquired yet more shoes. Then we went to the nearby outlet, where I picked up a clothing order from Peacocks, we all went into a Clarkes shoe shop, and then went to Tesco… where my mum’s mis-gendering got a bit much – on the one hand when we were passing the ladies clothes she said “I bet you’re dying to look at the clothes” which was quite funny, but in the homewares area she said to my dad “he found a sugar bowl” (rather than ‘she’) and, rather worse, when we were queuing  up at  the checkout they paid for a few of things of theirs first and once they had been scanned by the guy my mum said “the rest is his”, indicating my stuff… and my heart sank; I had a word with Dad about it once home, and he tried to suggest that with the noise of the shop the checkout guy probably hadn’t noticed… but what if he did? I shop there regularly; sigh. In the afternoon I said my mum could choose a nail polish colour for me if she wanted from my selection, as she wasn’t that keen on the colour I already had on, and so she did. Later, when I was in the garden mowing the lawns Dad was having a wander around and he said he liked my ‘gardening outfit’; my mum had said she liked the top, but she doesn’t like my girlie wellies. In the evening mum and I made dinner and, as she had dressed up to eat after her bath as had my dad, I decided to do the same, and so I put on the navy lace panelled dress that I wore recently to the Plough (see previous posts) – when he saw me Dad said “Ooh, very nice!” while Mum merely said “Oh you are a big girl”… but at least she labelled me as a girl. At the end of the evening Dad kindly reiterated my appearance,  saying “Andrea, I really must say you looked very nice this evening” and mum simply matter-of-factly said “I agree”, then he said I would be very smart and elegant in any restaurant. Again we enjoyed nice hugs goodnight… which were a bit premature as I decided to try on some of my Peacocks dresses, going into their bedroom to show them a couple – they both liked one, the other one Dad also liked (complimenting the pattern) while Mum said it was too short… even though it was only an inch above the knee.

Sunday was a quiet enough day, but very enjoyable. In the morning we went for a gentle walk along a can 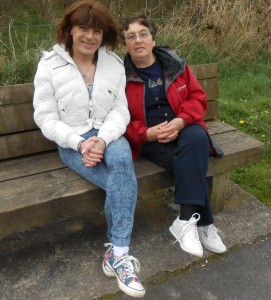 al tow path near my home, somewhere where we have been quite a number of times before – previously I have sometimes found such a walk with them tiresome, especially with their slow pace, but this time it was just wonderful to be out, enjoying one of our favourite pastimes together… but with me as myself and totally at home with them. After walking a mile and a half we sat on a seat near a lovely lake chatting… and as we were about to go I asked if they would take a photo of me with each of them, as it was their first time with the new-look me – they happily agreed, and took their own too, and then we walked back; we paused at a gate where a couple were watching some wild rabbits, and we talked with them for a while. In the afternoon mum asked for a look at my jewellery, which I happily agreed to. Later Dad asked if he could take some photos of me outside – can he ever! I readily agreed of course, and he took quite a few, with my mum watching (see below). I had a quiet word with my Dad, and one of the things I said to him was how very grateful I was that he has made such a huge effort to address me always with my new name and with correct pronouns; he said Mum finds it difficult to get used to anything ne

w at all… and of course this situation is still quite new to her. He said that “he liked everything that I wore and, as a man, could see what men might find attractive in me”! Isn’t he just great! He also said that when we had been out shopping it was obvious how confident and happy I was; I of course thanked him for his kind comments. I changed into another dress for dinner and once again Dad complimented me… and so we headed outside for another photo shoot! After dinner we played cards, during which we discussed my brother and his difficulty in coming to terms with me – mum said that he had been very upset after returning from the holiday when I had told him about the real-me… though they had not said anything about it to me at the time. I said that I was surprised at his ongoing difficulties considering an early, general chat that I had had with him about LGBT when he gave me the view of being very open-minded… though it’s different I guess when it’s your own family; in a previous post I have pondered various peoples reactions, which were not all as anticipated… mostly on the positive side. She also said how upset she had been at the news too, and I said that was why I had sent her flowers – Dad said to her that she was okay now though, and she said that now she has met me “and seen how beautiful you are” then not at all; aw, thanks Mum!

Alas that night we said goodbyes, as they were leaving very early the following morning – we had big hugs, and then my Dad said to me “It was lovely to finally meet the daughter we thought we’d never have”… and that is the FIRST time I have ever seen true, moving emotion on his face for just a few seconds, and of course I got emotional too at being labelled their ‘daughter’ and gave him another big hug, getting all sniffly after a while.

So that was my first weekend with my parents as Andrea, my true self. Apart from the mis-gendering from mum, it was a great success. I partly refer to many of the compliments I received to record just how wonderful the time was, partly of course because I love compliments (what girl doesn’t)… but it also highlights another difference between my mum and my dad – Dad complimented me so many times, and in virtually everything I wore, whereas Mum criticised quite a few little things and was not that forthcoming with compliments; maybe that is because she is still coming to terms with me as a girl. Anyway, I am looking forward to when we next meet… and they are already talking about when I can visit them, albeit trying to factor in how my brother will cope with it all.

7 thoughts on “The weekend my parents finally met the daughter they thought they would never have!”