The morning of Tuesday 21st October was just a teensy bit sad… because it really was the last day of Kirsty’s and my holiday break away. A long journey beckoned… but so did more positive experiences.

After a pretty good night of sleep I broke my world record for getting ready… which, including shaving my wretched facial hair, came to 68 minutes. Kirsty and I went down to a quiet breakfast room all to ourselves and discovered a good variety of food to keep us going –  a wide selection of cereals, a lovely fresh fruit salad, what turned out to be delicious local fruit yoghurts, and a cooked breakfast menu. With mushrooms proudly mentioned, the full breakfast (sans baked beans) was an obvious choice to set us up for the day… and our B&B host Paul delivered a superb meal – everything was delicious, especially local sausages, yummy fresh bread, but also lovely mushrooms, and as we finished off we complimented Paul on his efforts. We retired to our rooms to finish packing, then paid for the rooms and bid farewell to Paul… and I told him not to change a thing, it was a lovely B&B worth staying again at and he said that he hoped we would come again.

Our first port of call was only a short drive away on the A5… when the first positive experience of the day arrived with haste. We had decided to make a stop at Swallow Falls, a series of waterfalls on the local river. Kirsty parked the car and we strolled to the entrance, where I was slightly surprised to have to pay to see a waterfall… but for a couple of reas 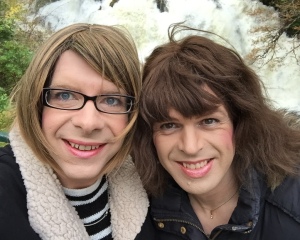 ons we were so glad that we did. I walked to the ticket booth and saw quite an old man, and I wondered if he would sense anything untoward with us with his age and be perturbed by it… but NO, he was very nice, and once I had asked for the tickets he said “Don’t worry about your shoes, love, the paths are very good all the way down!”. I was very pleased with that remark and, after instructions from him as to the order in which we should do things, we set off to the higher viewpoint… from where the selfie to the right was taken. The waterfalls were absolutely astonishing, the river itself did not seem that wide but the volume and power of the water were stunning. There was a fair amount of spray thrown up by the powerful falls, as well as a bit of a wind which hardly did wonders for my hair, but the visit was worth it for the views we witnessed – see below for the most impressive of the falls. 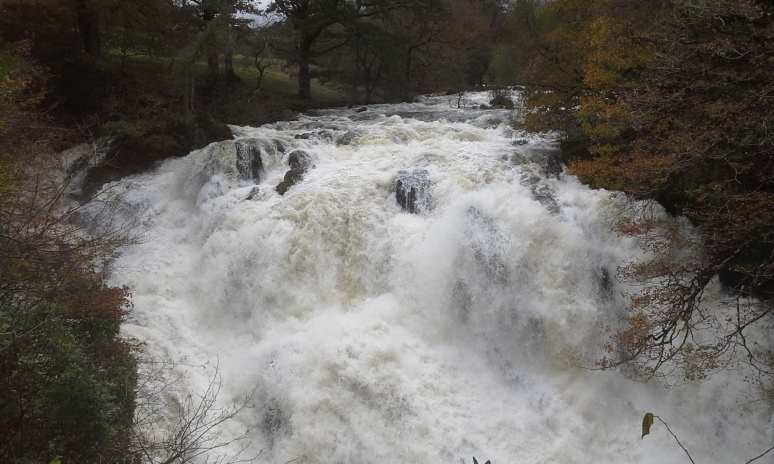 So, with tourist attraction number one already ticked off, we headed onwards through impressive mountainous countryside to our next one, Penrhyn Castle, a National Trust property near the coast. After our first National Trust visit the day before we hoped for another positive experience… and it seriously did not disappoint! We had quite a chat with the girl at the ticket office, who desperately tried to get Kirsty to join, and then we walked up to the castle entrance, and trotted inside as it started to rain. We were greeted by a friendly guide who gave us a map and explained the route through the main sites, and then we headed over to the first room, the library and games room for the “gentlemen” at that time. We had a lovely talk with the guide who explained all manor of things, and then went onto the ladies drawing room where a guide was already talking to some Am

ericans – as he finished off I made a quip which seemed to amuse, and then Kirsty and I had another long chat with this guide, and again I ended up making a joke which he genuinely laughed at… and once again I was in my new-found element, Little Miss Chatterbox having the time of my life. With time getting short, we headed through a number of rooms, having more detailed chat with a number of guides, including a woman at the top of a staircase who said about ladies sliding down the banister in evening dresses… and I said “If only we hadn’t left them in the car”! Sadly we had to depart after an hour at the castle as our ferry beckoned – we trotted through the rain back to the car… only for me to discover a text from Irish Ferries saying that due to poor weather (high winds) the service was delayed and we should check in an hour later than expected.

Well, we could hardly go back into the castle again, so we looked on the map for other attractions… and it turned out that the village with the longest place in Great Britain was conveniently nearby:

Apparently, this means “St Mary’s church in the hollow of the white hazel near to the fierce whirlpoo

l and the church of St Tysilio of the red cave”, a rather pointlessly long name. Anyway, having lived in Wales growing up for many years I had never been to this place, so off we went. Kirsty recounted her visit there many years ago and before long we arrived at a car park next to the railway station. After photos of us standing underneath the rather long signs (see right) we went to a large “department” store… where it soon turned out to be a bit like a large Edinburgh Woollen Mill, and we felt a bit out of place where most other people had silvery grey hair. But I bought a lovely pair of gloves… and, contrary to some people of North Wales being a bit unfriendly, the girl who served me was very nice and, during a nice bit of chat with me, said she hoped our ferry would not be delayed too long.

20-30 minutes later we arrived at the ferry port and joined quite a long queue of cars… that soon appeared to be going absolutely nowhere. After a while a port staff member approached and advised us of at least an hour delay, and that was only if the ferry could dock in the high winds (it had already failed once)… so Kirsty reversed onto the roundabout and we went shopping nearby. We popped into a Peacocks clothing store but nothing immediately grabbed me and, as Kirsty was keen to shoe-shop, we went next door… only to receive what was probably our only piece of negative TS attention the whole five days, from a late-teenage girl with awful orangey-red hair who found one or both of us curiously-amusing. But her more senior staff member was very helpful, and treated us like any other women.

Back at the port, we parked at the ferry terminal where I asked about the status of things… and the ferry had still not docked and I was told to come back 15 minutes later. To kill time we had a coffee, then went to the loo… by which time an announcement stated that the ferry could be boarded. So we returned to the vehicle queue and before too long we were aboard the boat. As we entered the Club Class lounge a staff member I remember from the outbound trip greeted us very nicely, saying “Welcome back ladies”. That was a good start… to a very long stay onboard – due to weather issues, and problems with another boat docking, we departed over four hours late and arrived in Dublin five hours late; but we had a good time on the ferry, with plenty of snacks and drinks… and no bother at all. And about an hour and three quarters later, with a petrol and loo stop on the way, Kirsty was dropping me home… and I couldn’t believe that that was it – THE END of our trip. I hugged Kirsty goodbye in my house after all my luggage was inside… and after a minute started to run out for one further, slightly tearful hug… but I was too late, Kirsty was just driving off, and so I watched her go and then retreated inside… to sadly wipe my face away for the final time of my holiday.

And what have I got out of this holiday? A number of things… including: