I must have been bitten by the shopping bug when out with Kirsty on Saturday because Sunday was more of the same! Except I was out by myself.

I left the house at around 1.30 and was not back until 7.10 in the evening; as per a couple of posts ago, without a shower my get-ready routine took EXACTLY the same amount of time – 75 minutes! I took less time on my eyes, but more time on other things… and the results are shown in the quick selfie I took, below right – my hair looks a bit windblown I suppose, though it was really rather windy, but it really does behave itself MUCH better than the previous style I had. I like my top too, so fancied a selfie moment. 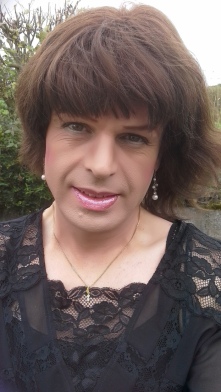 My first stop was the Banbridge Outlet, only a few miles from where I live, with a selection of out-of-town-lower-price stores. I started off at Next, a shop that Kirsty and I rather like; we have both bought a few clothes there in recent months. I had a good browse around, and eventually paid for a kilt-like skirt – the guy at the till was very friendly and we had rather a nice chat… and, well, he was quite, uh, attractive looks-and-voice-wise. And I will have an excuse to go back… because the skirt was the wrong size – I picked up the right hanger, but the skirt size didn’t match the hanger, oh it is so annoying when this happens. Anyway, shopping rant over, after a loo stop on to a few other shops, but nothing else caught my eye so I drove onto Lisburn… AGAIN. I walked to the same shopping centre as yesterday, through a busy mall and into BHS where I grabbed a large handful of clothes and went to try them on… except that there was a barrier in front of the changing rooms. So I went to the till and asked a girl if I could try them on, and she opened the rooms ups. I was quite a long time in there, and have bought a trouser suit perfect for my first day at work as Andrea… whenever that will be. I paid for the stuff, and then had to go to another till to return the shoes I had bought the previous day; the guy on the returns desk was very friendly, he asked if there was anything wrong with them and I said that they were alas just too small and there was not another pair in the sale.

Left BHS, and walked along the mall to an M&S food, where I went into the cafe and had a piece of cake and a mocha; more chat than expected, as the price charged for the cake was wrong, and then I paid for it with my card contact-less, and was not sure how it worked. Then I returned to the car, and as I left the mall a security guard held a door open for me and said “no bother” when I thanked him in a pretty good girlie voice.. even though I say so myself. I then drove to a different Tesco than normal, a larger one with a much bigger clothes section where I hoped I would be able to find a black jacket to match work trousers I had bought at another branch… but NO, they didn’t have one either – as usual, they had things I wanted in sizes larger than I am… though that’s quite a nice complaint to have, especially considering how ugly and fat I was a couple of years ago. But I found a very pretty top… and YET MORE patent black heels that just had to be bought and, after a fairly big shop, I went to a check out with a late-50s lady behind it. It was nearly closing time. I was queued behind the person she was serving and put my shopping on the conveyor, then another person came up behind me and till-lady said to them “I’m afraid I’m closing after this lady”, pointing at me. YES! Another guy then appeared behind me and I said to him that the lady was closing, so he said to till-lady “Are you closing after her?” and she agreed. YES again! I offered to close the till-gate behind me, and she smiled, then started putting my stuff through and we had a nice little bit of chat, and as I left said to enjoy the rest of my day, and I said likewise. When I got to the bottom of the conveyor I could feel nature calling, so after putting my shopping in the car I returned back to the entrance and asked the security guard if I could go to the loo as they were closed, and he didn’t mind. But after that all I could do was drive home, I thought of going for a little walk, but the weather looked rather grey… and within 15 minutes it was raining.

So, a 100% success rate – nobody that I noticed batted an eyelid that I was anything other than a biological girl doing her shopping – SO pleased! Almost perfect in fact… and if my BF Kirsty had been with me, it would have been.