This was the statement that my daughter made shortly after I picked her up today from her BFF. I had no response, if I had been quick thinking enough I should have carried on the “that’s my female side” theme, but I was not quick… because I was feeling down and weary.

Today I have been lucky, and it is thanks to my daughter. She is nearly 13, growing up too fast, and at this stage spends most of her time on child-social-media sites on her I-phone. Last night I would have picked her up… but she went to a disco, and asked me a few days ago if she could sleepover at a friend’s house – I said that she could on the understanding that she would not want to be picked up until at least 4.00 so that I could go on a walk with my group… and that is what happened!

Last night I painted my finger nails, and this morning I got out of bed at just after 8.00 and transformed back into Andrea. Took a terribly long time, it has been a long week at work, and it took a strong cup of tea to really get me going. I went through the usual make up routine, and after my foundation, bronzer, and eyes were done I put my hair on… and it was SO good to see me back, SO happy with that look, it is the hair that really makes my image, to have anything less on my head looks just SO wrong to me now (see later too). Eventually at 10.00 I was ready and was out the door like a shot….. only to come to a grinding halt on the motorway 20 minutes from home. Aggghhh!!! There were roadworks and all the traffic was bunched onto a single carriageway… but I did a slightly illegal (if “slightly” is possible) manoeuvre, took a diversion, got ahead of the traffic, then sped onwards and arrived at the venue (Crawdordsburn Park, on the coast near Belfast) just after 11.00 to see my group waiting. Whew!

I got my stuff out the car and ran over to them, said “Hi” to the group leader… and begged her to wait a minute as I was bursting to go to the toilet! TMI, I know! I trotted off, and then back, and then we headed off, and after warmly greeting one of my (former?) admirers (Alan) immediately started talking to Karen, who is from London (studying in Belfast) and she told me that this was her last walk as she was heading back home next week; I was rather sad, we always have lots of lovely conver 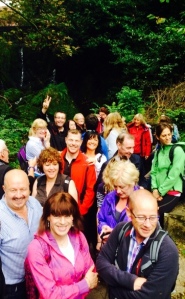 sation when we meet. We walked in the woods for a while, and after a group photo (see right, with me at the front) I then started chatting to a nice lady called Ann who I have met before, had LOADS of lovely chat with her and the group eventually reached the coastline, and the weather really started to improve. Then I started chatting to a younger girl called Helene who I had never met before, and she was really nice. After a while of walking along the coast we U-turned, and a guy called Michael joined in the conversation and us three had a great conversation all the way back to the car park.

At that point a few people left, but the rest of us went to the park’s cafe for a snack, generally the theme was scones (of a monstrous size and density) and jam, and a drink… though Karen and I also shared some rhubarb pie; before I sat down, who should I bump into but Michael from my support group! What a nice surprise! He was at a table with another person, and his cute puppy attached to one of the chair legs. I sat on a table with three others from the walking group and we chatted away for at least an hour, and were the last ones to leave.

I phoned my daughter to see what time she wanted to be picked up and when I suggested 6.00 she haggled with me and said 6.30; oh, well, uh, ALL RIGHT! So I stopped off along the way at a large Tesco supermarket where I did a good shop and bought more clothes, including a plain pair of black trousers for work (for when I come out) and also yet another pair of black heels and another pair of black ankle boots. A girl can never have too many shoes, and they are SO different from the ones I have already. Probably. Paid for my stuff at a till, as usual, could not really have a conversation with the girl as her supervisor was chatting to her annoyingly… until till-girl came to swipe my boots under the reader and found there was no tag. So, while supervisor went off to find another pair, till-girl apologised for the wait and I said no bother… and started to have a really good chat with her – she is part-time, doing nursing… ah, another launch into the conversation about my daughter wanting to be a nurse but hating the sight of blood! So a pretty successful Tesco shop, no stares at all (must be the new hair), but time to go home alas.

As usual, when I got to my back door I saw my girly reflection and was so happy to see it, but soon had to start wiping that image away… but not before I tried on some of my new clothes. The work trousers someone suggested I buy as a kind of gradual introduction of Andrea into the work place, well, I’m afraid I doubt that’ll work, girly trousers are SO much different (even down to there being no belt loops) and fit so much nicer

I have a particular order that I wipe my female self away now, in order of increasing impact – so nails first, then jewellery (low impact items), then outer clothes, then wipe off make up, then remove bra and breasts (at which point my chest feels just empty) and last of all goes the hair… and this is the real biggy, while the hair is there I can imagine I am just a girl with a bad case of hirsuteness, but once that goes it is such a shock to the system to see this strange Bob looking creature, my heart just falls off a cliff.

I drove to pick my daughter up, feeling tearful as I drove. I started asking her about her about the disco and stuff and she soon complained, in a tone of abject annoyance “Why are you sounding like a girl?” Well, my dear, it is because I have become one… though of course I have not said that… yet. Oh crumbs, it is going to be so hard coming out to her… but some time in the next few months it is going to have to happen.

I made a post to my online support group about having to pack Andrea away to avoid daughter discovering her before I am ready to divulge, and that this means not just having to pack and hide away clothes and hair and make up (that I am so fed up of doing) as if it is some shameful secret, but also having to suppress all the things that is Andrea the person that people see – the hand gestures, tactility, being so much more chatty and friendly, and so on… and before I could finish tears were running down my face… sigh.

P.S. (couple of things I thought of after writing all of the above):

Had a couple of good girl-affirmation moments coming up to the cafe. There were stalls set up outside, include one with rows of handbags on it. Was with Michael and a girl, he said to us “I’m surprised you girls aren’t rushing over to the handbag stall” and then when I passed it and showed a small amount of interest the guy on the stall did his best to flog me one, and kept calling me “love”.

Wednesday evening was a great improvement on the daytime. Was home early, changed back to Andrea, and went for coffee with my BF Kirsty, going there I was so confident and FULL of determination despite what that counselor had said to me, I was in such a happy place out, and had a lovely long chat over coffee with Kirsty. Then onto support group where we had a visitor from Germany, who was very interesting to talk with… though I fear I may have hogged the conversation for more than my fair share with my news.