Rathlin Island is a small isle off the coast of Northern Island, very unspoiled, with protected areas for bird life. I have never been before… and am subsequently likely to go many times in the future. This place was the venue for my latest walking group outing… and I had such an amazing time, full of lovely chat with many nice people.

I was in a bit of a panic getting there by 11.00, as I am not a morning person and it is quite a distance from where I live… and I had a wardrobe malfunction, made worse by doing things in the wrong order. Got my face on, pinned my hair up (to prevent dishevelled hair on a blowy day), then put my white T-shirt on… only to find that there were stains on it, and I have never even worn it!!! So T-shirt off… and then wrecked hair! Aggghhhh!!! Eventually got out of the door at 9.15, two whole hours getting ready (not good).

Took less time to get to  Ballycastle (where the ferry departs) than I thought, was bursting for the loo and so popped into a local supermarket (with attached petrol station). Bought a banana there (for lunch), am not sure if an old guy in front of me was suspicious of me, as he gave me a couple of once-overs… or whether I just looked a bit odd to him in my walking boots. Anyway, otherwise fine, voice okay, everyone else fine including the guy who apologised when I nearly bumped into him coming out of the shop.

So, parked at the ferry terminal, queued for tickets where I met a couple of the walkers, then wa 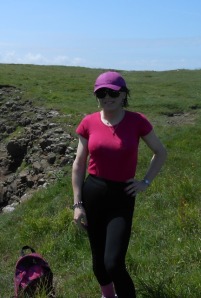 lked down to the ferry with the group leader (another Andrea) and another walker Kathleen who I ended up sitting on an outside seat next to. Had great chat with her – she is really friendly – also talked to another walker John who is keen on photos (who I let tell me all about filters and zoom lenses and played dumb, even though I know much about this), and to yet another Andrea; never met any of them before. Getting ready to start the walk, Kathleen met two other walkers, Ann and Susan, and the four of us spent much of the four hour walk talking to each other about all sorts of things, and I had just the most wonderful time with them, even saying things to them that made them laugh – it sounds such a simple thing, but to do that as Andrea and get such a natural and pleasing response is such an amazing feeling. Had a bit of chat with a few other people now and again as I walked around, including John (a different one, who I met at the dinner) who was very nice, and a girl who I gave up with as she was rather grumpy and whatever I said did not induce much of a positive response; she asked me if other walks were more moderate, and in her squeaky trainers I think she was struggling. We all had a picnic and Ann, with her Tardis-like coolder bag, shared an amount of food with Kathleen and I. The picture of me is one that Ann took of me, she just asked me if I wanted her to take a picture of me, so why not! Not the best I suppose, it’ll do.

Once the walk was over we met at a place near the harbour for the loveliest, light scones and tea with cream and jam. Yum! And I ended up chatting to another newbie – Ivan. He has travelled much of the world, and gave us an instant common area of interest. Once outside we all lounged around in the sun, and I had good chat with a married couple, Kathy and Michael, who I met at the meal, and several others, including a guy Mark who I did not recognise with his sunglasses on. (By the way, photo below right is taken on the walk). Queueing up at the ferry I ended up 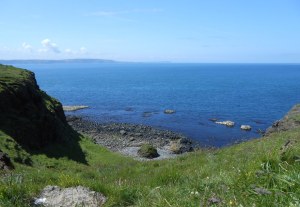 talking to Ivan again, as he has a camera very similar to my Bob one (which I did not take). On the ferry itself I talked to him for the whole 25 minute journey, much of it about travel, also about jobs… and as his wife hates travelling and he often goes on his own, he half jokingly (or was it??) said to me that if I was ever stuck for a travelling companion then to ask him!! And then as we got towards port he said that it would be nice if we could meet up for lunch in Belfast (where he works) if I was ever there!! That is after chatting with me for only 30 minutes in his life!!! Surely, I cannot be making too much of a mess out of being Andrea if that has happened. can I? I also told him about my wardrobe malfunction, and he said that being a guy he can just throw anything on but it is different for me! Oh, you better believe it! And he made a comment indicating I was still well turned out. I wonder if I am doing so well with this group purely because I am in an arena where I can really be my true self… and the real me is really shining? Or maybe they are all just nice people, can see through me, and are able to accept me. But I really think that at least some of them don’t know! Perhaps I am kidding myself. So, goodbyes were said to various people, and after changing into ballet pumps and sorting my hair out I left.

As it was such a beautifully sunny day, I took a leisurely journey home along the north e

astern coast, and saw some stunning scenery; see right for an example, this is overlooking Cushendell. At my first picture stop a guy walked past me and said hi, at another stop another guy in a peaked cap with a cup of tea also said hello in a very friendly voice and asked how I was. After a while I had to stop at a petrol station for another banana as I was starving… and, just as I parked, a van pulled up and three young guys (late teenage/very early 20s) got out. I was momentarily disheartened, I thought, “oh no, here comes trouble”… but went in anyway… and NO trouble at all, the lad behind the checkout was really nice too, even if I should have queried the outrageous price of my 44p banana!

And then I drove home… half the time feeling a lovely glow inside at such a wonderful day, full of people that either had no idea about my gender-nature or alternatively fully accepted it. And by the time I got home I had already received a greeting from Ivan, saying the following:

Andrea, It was lovely to meet you today. What a wonderful, awesome place Rathlin is, I am definately planning a weekend there sometime. I hope you enjoyed the run home along the coast, I am sure it was so beautiful. You are a really interesting person to chat with, at least I thought so! It would be nice to have lunch maybe some time if you were free or even a walk should we get some good weather at weekends or some evening. I wish you well with the interview, fingers crossed. Again thanks for being part of my day. Ivan

“Thanks for being a part of his day”! And the possibility of a walk with him! Crumbs! I am half-tempted to do the walking idea, as I want to do stuff other than just shopping, and it is much nice to do things with other people. But I wonder how safe I would be (though he seems a gentle sort)…. and where this could go…

WOW! What a journey this is!