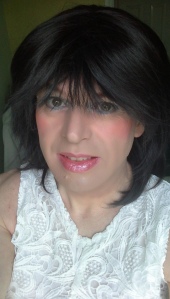 So why did I say I should have started posting 5 months ago?  Well, just over five months ago I joined the online Transliving TG support group and, almost to the day, five months ago I started properly venturing away from my house as Andrea (not counting a few times prior to that when I just went out in the car, and the couple of occasions in late 2013 I stupidly wandered around late in the evening in the dark when hardly anyone was around).

My confidence and courage started at zero, and have grown quite a bit over the period. My voice is still a bit ropey, but has improved since end-March, alongside is a photo of me from March 2014.

So what kind of things have I done out as Andrea over the last five months? The following are the main things, starting at the top with baby steps, gradually increasing in size:

Since then my activities have mushroomed and I have now done all of the following:

So, in five months, I think I have done quite a bit… although of course there is a lot more I can achieve, such as going travelling as Andrea, knowing that I am accepted at my walking group, going to my GP and getting referred to a gender clinic…. and going full-time. And all of this will take some time. Originally I had an ultra-conservative timeline for coming out as 10 years from now (based on financial security)… but when I mentioned that timeline to my counsellor I burst into tears, and so I have set myself the following targets:

Hmm, we will see how I get on!